It's projects like this that I can't make up my mind about.  Do I love them, or do I hate them?  I guess it's a little of both.  Certain projects take up a lot of time even though you know it's going to be something that's temporary.  But once it's done, you love the end results and it was worth it.

Over the past few years my kids haven't really had to make many Valentine's boxes because they have usually done them as an art project at school.  But this year both of my Elementary age boys had to make one. And they were for a contest.  I think the contest part was what got me going, because I knew we could come up with awesome designs.

First comes motivation.  We happened to have a yellow shoe box sitting on the floor next to our Minion goggles that came with our Despicable Me movie, and wala!  The goggles fit the box and the idea was born.  My youngest son LOVES the movie Despicable Me, so he was all for the idea.

Evan is in second grade, and this wasn't exactly the easiest project for him, but after I drew all of the patterns on the paper he did as much punching, cutting, and gluing as he could (except for those darn overall straps which weren't very easy.)  And a MINION was born! 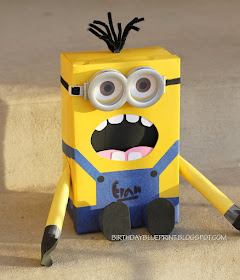 He was named Evan, after my son, and turned out so cute!  His mouth is where you put in the Valentine's cards.  The eyes are circle punches, the arms are rolled up newspaper covered in yellow construction paper, and the boots are toilet paper tubes and black craft foam. 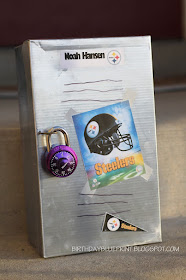 Noah's box was inspired from the Family Fun website, and the fact that I had some chrome spray paint in the garage.   His dad hooked in a piece of wire for the lock to hang on and the opening is at the top.  He wanted it completely taped shut so that no one could get into it.
Noah was able to do most of this himself and it turned out great.  No, he's not that big of a Steeler's fan, but his teacher is, and most of his classmates, so he was going for the popular vote. 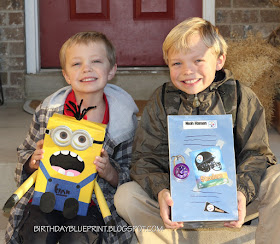 Despite taking up an entire afternoon, we have two very happy boys, determined to win today, and proud to show off their Valentine's boxes.  Although the minion may have just joined the family because they boys keep hugging it and said he's staying forever.
Lunar daughter
Share